The Hound of Baskervilles by Sir Arthur Conan Doyle 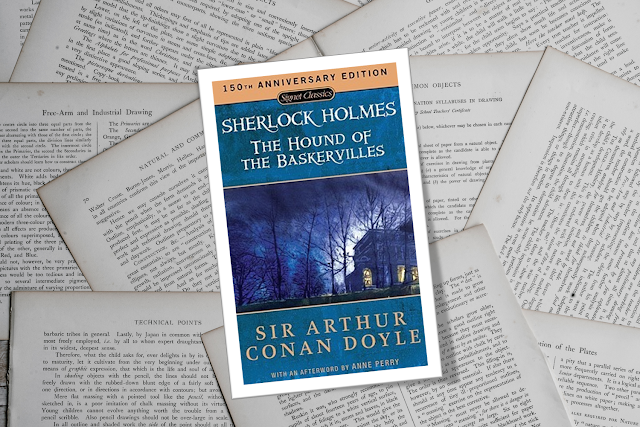 Holmes and Watson are faced with their most terrifying case yet. The legend of the devil-beast that haunts the moors around the Baskerville families home warns the descendants of that ancient clan never to venture out in those dark hours when the power of evil is exalted. Now, the most recent Baskerville, Sir Charles, is dead and the footprints of a giant hound have been found near his body. Will the new heir meet the same fate.

I can say that this is the best Sherlock Holmes’ novel I have read so far. I indulged myself into it for less than a day because I just can’t get enough of the case. It was cleverly written and there are no dull moments.

The story revolved in the pursuit to uncover the truth of what really happened on the day Sir Charles Baskerville died. Dr. Mortimer, the trusted assistant and medical adviser of Sir Charles consulted Holmes to seek advice regarding the matter.

The adventure started when Holmes asked Dr. Watson to accompany Sir Henry Baskerville (nephew of Sir Charles) during his stay at Devonshire. Dr. Watson was on a mission to know the neighbourhood of Baskervilles. He had the chance to know the Stapletons and Mr. Frankland. The peculiar and curious occurrences that happened during Dr. Watson’s stay at Devonshire is really unbelievable yet there were evidences that undeniably proved its existence. Plus, the escape of a notorious criminal made the case complicated.

I actually made a list of all the characters I suspected to be guilty of the crime. I even tried to apply Holmes’ deductive reasoning! I argue with my own hypotheses to the point that I already became mistrustful to almost all of the characters!

Unfortunately, despite all my attempts to use deductive reasoning, I just ended up being frustrated. As the story progressed, I finally learned that all my guesses were wrong. :(

Sherlock Holmes is really a genius in his field! I remember laughing out loud when he finally revealed who the real culprit was!