All That Glitters by Jackie Sonnenberg 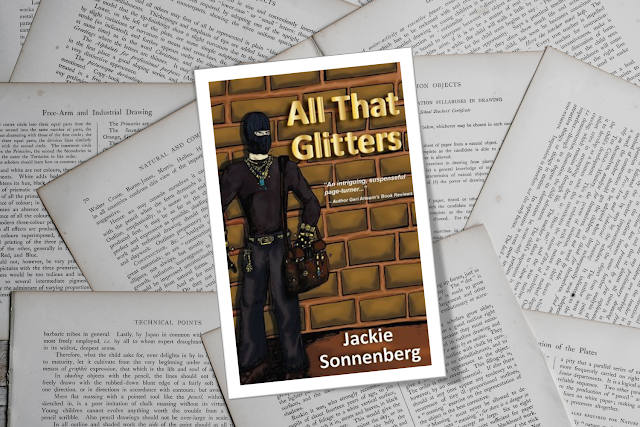 A jewelry thief is on the loose in the town of Wickerwire, Iowa. He leaves behind no trace except for his newly-established calling card: candy in place of the jewels he steals, the media giving him the nickname of “The Candy Caper.” He makes his mark and vanishes, and no one seems to have any leads on him whatsoever. He won’t give up until he finds his special item…but what exactly is he looking for? And what exactly is in it for him?

Said to be a “backwards superhero story” telling the story of a would-be villain, All That Glitters is a satisfying read for everyone and anyone who has ever fantasized about having a double life, a secret identity as well as a special ability…and whether this ability is seen as a gift or a curse.

The story started off with a prologue in the POV of the jewelry thief. The prologue really provided a good preview of what may happen in the next chapters. Unlike most prologues which are usually vague, the prologue of All That Glitters was straight to the point. It talks about the tale of Chimalhuitzcoatl – a shy, weak and indecisive Aztec prince who is next in line to become king. Knowing that he wouldn’t be a good king with such un-kingly traits, Chimalhuitzcoatl prayed to the Aztec gods for help. One night, the god Tezcatlipoca appeared and gave him a set of charmed jewelry that would help him become a brave and strong king and true enough, he became a great king. On his deathbed, he wanted the jewelry to be destroyed because he was afraid someone may discover his secret. However, it was never destroyed. He cast them away instead. Many years later, people believed that the charmed jewelry found its way to the United States, particularly in Iowa. I think discussing this urban legend before getting into the intricate details of the main story was really important because it gave the readers a glimpse of the storyline as early as possible.

The book was narrated using different POVs. I always love this kind of narration because it gives the reader a chance to know and understand the characters more although at first I somehow got confused because of the sudden change in POVs. Reading the first few chapters, I must admit that I really couldn’t understand where the story is going, but as the story progressed, I eventually picked up the pace. Now I think it’s just a part of the author’s strategy to keep the readers asking and wondering in order to maintain the curiosity and excitement.

Now, let’s talk about the main characters. I developed an instant liking towards Nick Allen, a dentist who is dedicated to his profession. I love his relationship with his patients! He always makes it a point that his patients are comfortable during their visit to his clinic. His good rapport with them makes him one of the well-loved dentists in Wickerwire. His relationship with his colleague Dustin and assistant Susan is also good. As the story continues, much of Nick’s personal life was revealed.

Officer Anthony Massey is also a likeable character. Despite failing to capture the “Candy Caper” a number of times, Officer Massey remains determined and committed to his duty. Pressured by his superiors, Officer Massey promised himself that he will be the one to capture the thief. I felt my heart pounding whenever he has close encounters with the thief! I also shared his frustration over the failed mall raid. OMG! He was so close in capturing the Candy Caper!

Thunder God is also an interesting character. He is a wrestler who is said to carry a jinx or curse in him. After visiting a psychic, he was advised to find a lucky charm that will take away the jinx.

Moreover, the jewelry shop owner Bridget Piers is awesome! I love her character! She’s a role model to all businessmen and businesswomen! She maintains her shop’s safety and protection to the highest level. She’s a smart woman and not easily fooled.

And last but not the least, my favorite character in the story is none other than the thief a.k.a “The Candy Caper.” He’s my favorite POV! By reading his POVs, I realized that I should not judge him harshly just because he’s a thief. As what one of the minor characters said, “We all got bad habits, but that doesn’t make us bad people.” As the story progressed, I learned more about the Candy Caper and the reason why he steals jewelry.

It’s amazing how the paths of these characters crossed. I love how the author wove the plot. The Candy Caper’s identity was exposed early but not prematurely. The author picked a good part where she should unravel the thief’s real identity to the readers. I was so disappointed with myself because during that time, I don’t even have a suspect yet, and when the thief’s identity was finally revealed, I was shocked and amazed! It’s obvious! You don’t need Sherlock Holmes’ deductive reasoning to know who the real culprit was. It’s just a shame I did not noticed it when it’s there right in front of me.

In general, I can say that All That Glitters is a good read! I was entertained! It’s a crafty combination of urban fantasy, mystery, crime, action, friendship and a little bit of romance. I recommend this book to all the readers who love mystery. This book is truly a gem!