The Adventures of Tom Sawyer by Mark Twain 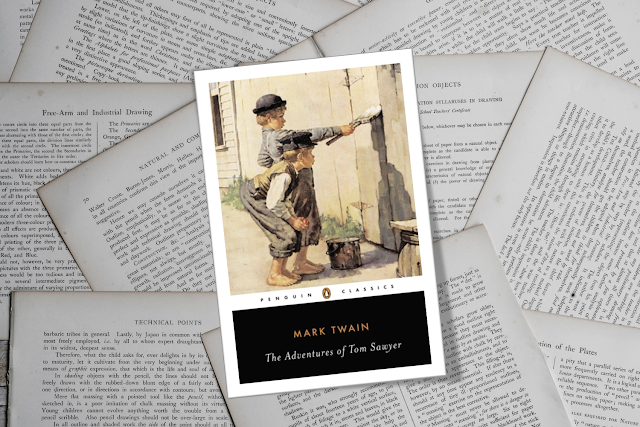 In this enduring and internationally popular novel, Mark Twain combines social satire and dime-novel sensation with a rhapsody on boyhood and on America’s pre-industrial past. Tom Sawyer is resilient, enterprising, and vainglorious, and in a series of adventures along the banks of the Mississippi he usually manages to come out on top. From petty triumphs over his friends and over his long-suffering Aunt Polly, to his intervention in a murder trial, Tom engages readers of all ages. He has long been a defining figure in the American cultural imagination.

Alongside the charm and the excitement, the novel also raises questions about identity, and about attitudes to class and race. Above all, Twain’s study of childhood brings into focus emergent notions of individual and literary maturity.

The Adventures of Tom Sawyer is a novel written by Samuel Langhorn Clemens, most commonly known in his pen name, Mark Twain. It was published in 1876, eleven years after the Civil War ended. The story was set in St. Petersburg, a small town in Missouri and was about a boy named Tomas Sawyer and his journey through boyhood. Tom Sawyer and his friend, Huck Finn, a nomad orphan shared quite a number of pranks and adventures.

In the first few chapters of the book, Tom Sawyer and the other characters were introduced. Twain also compared Tom to his half-brother, the rule-abiding Sid. Different adventures were narrated in the succeeding chapters. One of the highlights of the story was Tom and Huck’s creepy encounter with Injun Joe at the graveyard. The two boys witnessed a murder that haunted them.

Over the years, The Adventures of Tom Sawyer suffered from the public’s scrutiny. In 1905, the book was removed from the children’s section of the Brooklyn Public Library. The officials said that the characters of Tom Sawyer and Huck Finn were “bad examples to the youth” thus corrupting the young and innocent minds of the children.

I first encountered Tom Sawyer through an animated TV series when I was still in grade school. Back then, I did not have any idea that the show is based on a novel. It was only when I am in high school that I learned that the said show was inspired by Mark Twain’s novel. However, it was only one month ago when I decided to actually read it.

When I started reading the book, I realized that it was as entertaining as the animated TV series I used to watch. I got hooked on the first page and I couldn’t stop reading! I laugh at Tom and Huck’s pranks; I giggled at Tom and Becky’s “engagement”; and I got mad at Aunt Polly when she beat Tom. I remembered my childhood and how it was being a child - imaginative and carefree.

However, this is not the kind of book that I’ll recommend to the children no matter how entertaining and compelling it was for me. After reading the entire book, I realized why it was banned from many children’s libraries. Tom Sawyer is not a good role model for the children. He smokes, he starts fights, he sneaks at midnight, he ran away from their house and he even wanted to fake his death. Children are most receptive at this age. They are in the stage that they tend to role play. Personality development is also at its peak. I saw how Tom looked up to Robin Hood and how he dreamed of becoming a pirate. Just like that, the children might also look up to him and imitate his ways.

The kind of book a child reads greatly influences his/her personality development. I bet you have seen young girls dressed like Snow White or young boys dressed like Superman.

Tom Sawyer is an orphan who was left in the custody of his Aunt Polly. That being said, I realized that I can’t really blame Tom for being so mischievous and bully. During this stage of his life, parents and guardians play an important part in his character building. Plus, having a school teacher who uses lashing as a form of punishment just makes the matter worse. I believe that the use of corporal punishment is not the proper way to discipline and instill good values to the child. It will just teach them how to become aggressive and violent and they will eventually end up becoming a bully.

The Adventures of Tom Sawyer is not the only literature that talks about the innocence of childhood and the inequities of adult reality. Through the years, several writers produced literature quite similar to it. Books such as The Catcher in the Rye by J.D Salinger and The Perks of Being A Wallflower by Stephen Chbosky are two of the most famous and controversial books that narrate the dynamic teenage years.

I’m giving this book four (4) stars because I am entertained by its timeless humour. It would have been a five (5) if only Twain did not marketed it as a children’s book.